Wish I Could Write A Lovesong – 40th anniversary. 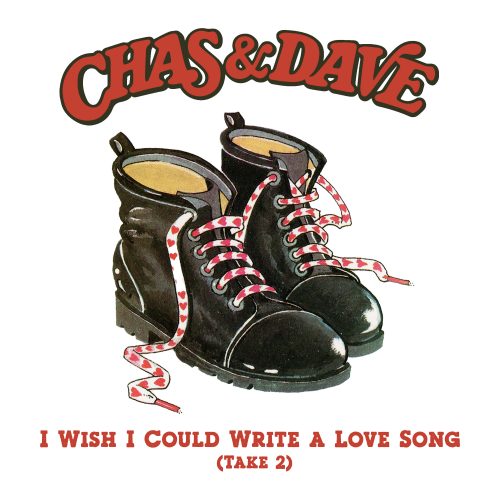 Another 40 year milestone! – 40 Years ago today Chas & Dave released “Wish I Could Write A Love Song”.

The song was inspired by Chas writing the words on an anniversary card for his wife Joan. To mark the 40 years we’ve released a recently-discovered alternative version of the song which you can download and stream here

Aint No Pleasing You – 40th anniversary. 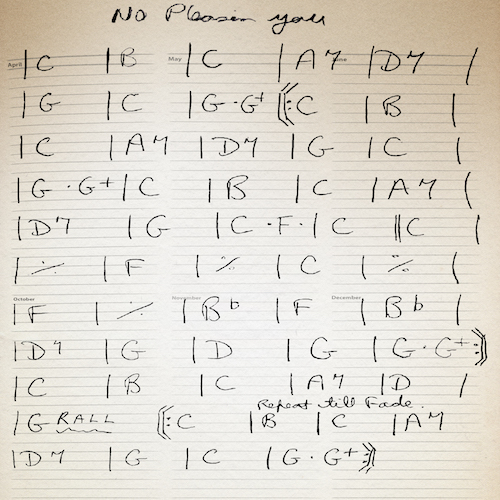 40 years ago this week Chas and Dave released what was to become their most successful and enduring single. “Aint No Pleasing You” was, at the time, seen as a departure from their established sound – a ballad about a relationship on its last legs. But the boys had been playing the song live for a while before releasing it and knew from the audience reaction that it could do well.
And do well it did, narrowly missing out on the top spot in the UK singles chart after spending over ten weeks in the top 40, hitting number one on various music weekly charts, and going on to be their first big overseas hit – resulting in a German language version being recorded!
To mark the occasion we’re releasing online a stripped-down strings version of the track. Have a listen and download here

Chas’s critically-acclaimed new album of unheard songs and recordings is out now. Featuring the singles “Magic Time of Christmas” and “Street Games”, as well as key tracks “Trigger (Is What I’m Known As)”, and Chas’s poignant version of the Beatles’ “I’m So Tired”. Order on CD or vinyl from the official Chas & Dave web shop here

The new track ‘Street Games’ – the second single from the forthcoming Chas Hodges album “Right at Home – selected unreleased home recordings 2007 – 2017” is available to stream and download now. The song was written and recorded around 2012 and is pretty much autobiographical of Chas’ Edmonton childhood. The amazing video has been created by the hugely talented benpics – the man behind the Bob Mortimer/Athletico Mince animations as well as the recent memorable clips for C&D classics Gertcha, Wallop, and Diddlum Song.
Download or stream ‘Street Games’ now and pre-order “Right at Home…” from our official webstore, or your local indie here http://smarturl.it/Chas_Hodges_Home

“Magic Time of Christmas” was the first dedicated Christmas song that Chas wrote and recorded, and until now has remained largely-unheard.

When Chas wasn’t on the road (or on his allotment!) you’d find him in his living room recording music. “Right at Home” is a very special collection of that music – unreleased, and unheard songs recorded over a ten year period between 2007 and 2017.

These are not rough ideas but fully-realised and hugely-enjoyable songs that Chas would’ve wanted the world to hear, including ten original compositions and four covers.

“Magic Time of Christmas” is available now to download and stream on Spotify, and Apple Music here.

“Right at Home” will be released on the 26th February 2021 and is available to pre-order now on CD, 180g Black Vinyl and digital here.

We were very saddened to hear of the passing of legendary producer and record label boss Derek Lawrence. He produced huge-selling albums for the likes of Deep Purple, Wishbone Ash, and many others.

Derek was the first person to give Chas & Dave a shot by releasing their debut album “One Fing ‘n’ Annuvver” on the Retreat label he’d set up with guitar ace Big Jim Sullivan, and he had faith in the boys to let them produce the album themselves – something almost unheard of for a label boss to do for a band’s debut album.

Rest In Rock’n’Roll, Del. You and Charlie keep the noise down up there!

Even more surprising than “Wallop” never having an official video made back in the day, is the fact that C&D’s first hit single “Gertcha” didn’t have one either. But the genius of benpics does it again and we’re knocked-out to share the brand new official animated video for the “Gertcha” here

Wallop! – released in 1981, but never had an official video clip…until now. The brand new official animated video by the excellent benpics (Bob Mortimer/Andy Dawson/Athletico Mince) is here, and it’s a corker. Have a look here.

We’re chuffed to hear that not only is the classic kids’ show “Crackerjack” returning to our screens, it also features a rather excellent new version of Chas & Dave’s classic theme tune from the 1980s. The first episode airs on CBBC, 17th of January at 6pm. 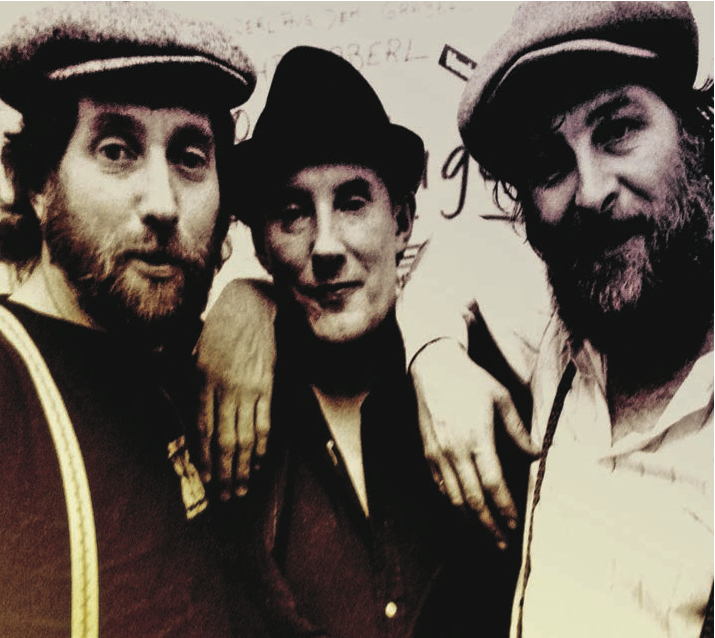 In memory of Chas & Dave’s former drummer Mick Burt on the fifth anniversary of his passing.

Keep giving it stick up there Burtie!

Hard to believe it’s been one year since Chas left us. So it’s fitting that today we present the entire Chas Hodges Memorial Concert from last December for you to enjoy. You can watch it here 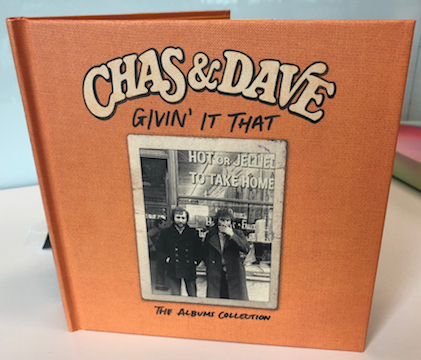 “Givin’ it That” – the complete Chas & Dave studio album collection.

Just arrived, “Givin’ It That” – The albums collection box set
10CDs including all nine original albums, gathered together in one package for the first time ever: One Fing ‘n’ Anuvver (1975), Rockney (1977), Don’t Give A Monkey’s… (1979, and now featuring the four extra tracks on the 7” EP included with the initial pressing), Mustn’t Grumble (1981), Job Lot (1982), Well Pleased (1984), Flying (1987), That’s What Happens (2013), and A Little Bit Of Us (2018).
107 tracks, including all the hits, plus a disc of rarities, many either previously unreleased. These include the previously unreleased recordings from May 1973, rare B-sides and demos from the “One Fing ‘n’ Anuvver” period, a previously unreleased live track recorded in a Docklands pub in 1977, the rare original versions of “Gertcha” and “Sideboard Song”, and two rare B-sides on CD for the first time (“It’s Only The B-side” and “Sunday”) from 1979.
Plus a 32-page booklet with photos and memorabilia, including the original handwritten lyrics for “Rabbit” and “Sideboard Song” amongst others.
Release date pushed back slightly to the 8th November and available to order now here: smarturl.it/GivinItThat

The Other Side of Chas & Dave

What is “The Other Side of Chas & Dave”?
Over to Dave to explain:

“It had been on Chas’s mind for quite some time to showcase our more laid-back numbers. A lot of people had never heard this side of what we do even though our biggest hit – “Aint No Pleasing You” – was a ballad, as well as “I’m Going Back” being used on the teddy bears Heathrow ad. So when the opportunity came to put together this compilation, it became a labour of love for Chas. In fact, it was the last release that he was involved with and wrote sleeve notes for.
Enjoy listening to our “other side”.
Dave Peacock.

This wonderful collection of songs is released digitally, on CD and coloured vinyl and is out now. Order from our official webstore here https://chasanddave.tmstor.es/

We’re incredibly pleased to announce that Chas’ memorial show raised over £40,000 for WaterAid. This will pay for clean water and sanitation for life for thousands of people. Thank you again to all the fantastic artists who donated their time and talent, and of course the fans for making the event a sell-out as well as your many generous donations. Chas would have been overjoyed with the result.

The show itself couldn’t have gone better – with old friends Eric Clapton and Gary Brooker joining what was already an amazing array of talent to create a memorable finale to a memorable show.

An evening of music and entertainment in memory of Chas Hodges.

Anyone who knew him would tell you Chas Hodges lived for playing shows.

So there’s no better way of honouring his memory than putting on a show for him featuring artists from across the entertainment world who he shared friendship, history, and admiration with.

The whole evening will be presented by Chas’s long-term friend and musical partner Dave Peacock, and will also feature musical contributions from Chas’s family.

Proceeds from the show will go to Chas’s favourite charity WaterAid.

“It’ll be very strange for me playing a show without my mate. But I’m sure he’d have been well-pleased with the line-up that will be paying tribute to him”.

Tickets go on sale on Friday, 19th of October.

Chas’ wife Joan, his children, and Dave have been overwhelmed by the many thousands of messages of love and support and would like to thank everyone for those.

For the record, we would like to clarify that Chas did not die of cancer. The doctor’s final diagnosis was pneumonia and the cancer was under control at the time of death.

We feel this is important to state as Chas wanted to bring comfort and hope to people suffering with cancer through his own experience with the disease, and it would mean a lot to him that the hope remains.